Tom Heaton has been linked with a surprise move to the Emirates, as Arteta actively seeks for an experienced back-up ‘keeper. 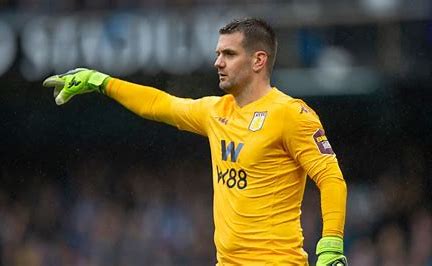 Aston Villa goalkeeper, Tom Heaton, has been linked with a surprise move to Arsenal, as Arteta searches for a reliable back-up ‘keeper.

Arsenal sold Emiliano Martinez to Villa in the summer and whilst Martinez has thrived at Villa Park, Arsenal have failed to adequately replace the shot-stopper.

Whilst Bernd Leno has been Arsenal’s No.1 keeper this season, when Runarsson has had opportunities to showcase his talent, he has failed to do so.

Runarsson most recently made a mistake against Manchester City in the League Cup quarter-final, when he punched a Mahrez freekick into his own net.

Whilst Runarsson has plenty of time to improve at Arsenal, Arteta is actively searching for a solid performer who can deputize for Bernd Leno.

“We are assessing the situation with the three positions on the goalkeeping area and we will find a different solution, probably in this window,” Arteta said.

According to some reports, that different solution might come in the from of Villa reserve keeper, Tom Heaton, who has recently recovered from an anterior cruciate ligament injury.

Heaton has not played a Villa game in 12 months and the 34-year-old has fallen behind Martinez in the pecking order at Villa.

It would seem a sensible move for all parties: Arsenal would be signing an experienced goalkeeper and Heaton might potentially have one eye on breaking back into the England squad for this summer’s delayed European Championships.