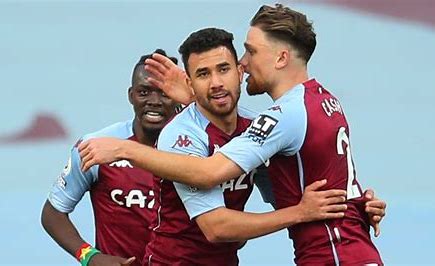 Alexander Mitrovic had put the Cottagers on course for a vital victory that would take them out of the relegation zone after a calamitous mistake by Tyrone Mings.

However, Villa rallied late on, with substitute Trezeguet scoring two goals and Watkins scoring a third goal to complete a fantastic turn-around.

Astonishingly, the victory was the first time that Aston Villa had come from behind to win in the Premier League this season.

With, Villa trailing in the game and struggling to create clear-cut chances, Dean Smith brought Trezeguet, Keinan Davis and Jacob Ramsey off the bench.

The Villa manager said, “Sometimes you need the impact to come from the subs bench and that is what happened.

“All three who came on made an impact on the game and lifted our performance. It changed the game for us.

“Trezeguet has come on and done what was asked of him. He has been a bit unfortunate this season and I’m really pleased for him.”

Aston Villa were, once again, without their talismanic captain, Jack Grealish, who had been set to make his return against Fulham.

However, Smith revealed that the England international had complained of some discomfort at training on Saturday.

“Jack wants to play more than anyone but when he tells you he has a little bit of pain still you have to take notice,” said Smith.

“We erred on the side of caution. Yes he is going to be a miss because of the things he brings to the team but the players have shown today they can go and get without him as well.

“We believe we have a quality squad. It is just about showing it on the pitch.”