Villa boss Dean Smith has lamented his players for a below average performance at the Amex stadium but praised Martinez for his fantastic performance. 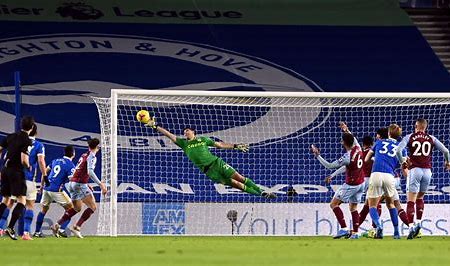 Dean Smith lamented his Villa players for a below average performance in their 0-0 draw with Brighton, but, praises his ‘fantastic’ goalkeeper Emiliano Martinez.

Aston Villa manager Dean Smith praised Martinez for his ‘one-man-show’ performance and admitted his players were below average against Brighton.

Emiliano Martinez, who signed from Arsenal in the summer, made nine saves against Brighton – the most he has ever made in the Premier League.

‘You could say that (that we’ve had an off day). But I just said before, it wasn’t even bang average today,’ Smith said.

‘I’ve not seen the quality of the players that we’ve got make so many unforced errors as we did and thankfully our goalkeeper was on form and kept another clean sheet to make it 12 for the season.

‘(I’m) really pleased with his (Martinez’s) performance, he’s made three top drawer saves, there were a couple that were straight down his throat but we didn’t protect him well today.

‘He’s a fantastic goalkeeper, a great acquisition for Aston Villa, but in the other 12 clean sheets he’s kept this season he’s been protected really well.

‘Today we didn’t because we kept giving Brighton the ball back and they produced a lot of shots on our goal and he was called into action too much.

‘Certainly this season (it was his best performance) but he was called into action too much today, and it was a one-man show at times, such was the sloppiness of our play.’

Aston Villa will be hoping Martinez can replicate his excellent performance against Leicester City, next Sunday.

Three Aston Villa players with a point to prove against Brighton
Can Aston Villa finish in the top six this season?