Dean Smith has provided an update on his No.2 John Terry’s future amid links to Bournemouth vacancy. 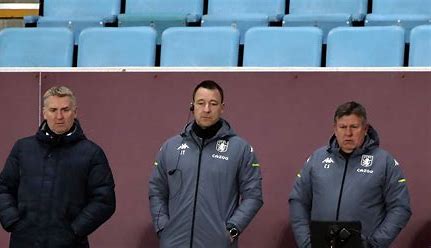 John Terry was appointed as Smith's assistant in 2018 and had previously been linked with Bristol City but remained with Villa.

Aston Villa manager Dean Smith has insisted that the club have had no approaches for John Terry amid rumours over the Bournemouth vacancy.

However, Smith also revealed he would not stand in Terry’s way if the time and club were right for the former Chelsea captain.

Terry has been linked with manager less Bournemouth and Scottish champions, Celtic, where Neil Lennon is under severe scrutiny.

Dean Smith said: ‘For somebody to leave a football club and go to another one then you need them to contact us, and we haven’t been contacted so…

‘I haven’t really spoken to JT about it, to be honest. The conversations I have had with JT is that when it suits everybody (he can leave).

‘I’ve always said right from the outset that John Terry came here to learn about coaching, and he’s become a very, very good assistant manager to myself. But ultimately, he’s come in to learn the trade to ultimately become a number one.

Aston Villa head to Brighton on Saturday ninth in the table, with games in hand on all but one of the teams above them.