Aston Villa’s chief executive Christian Purslow has outlined the reasons behind Villa’s improvement in an interview on the Aston Villa website. 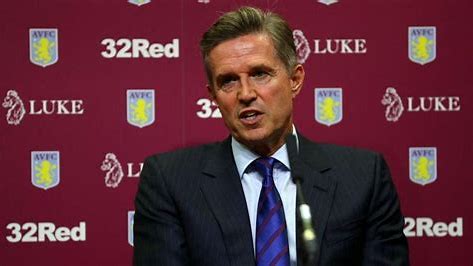 Aston Villa chief executive, Christian Purslow, has outlined the reasons behind Villa’s stunning improvement and made an exciting prediction for the future.

Aston Villa struggled in their first season back in the Premier League, with the Villains flirting with relegation all season.

However, their post-lockdown form proved to be enough to keep Dean Smith’s men in the first division.

The contrast between last season and this season is stark and Aston Villa are currently ninth in the table after an impressive campaign.

Christian Purslow spoke to VillaTV  about Villa’s improvement and stated that the progress made is due to multiple factors.

“Everybody can see that in terms of our current position in the League table at the halfway point, our number of points at the halfway point it’s obvious that, I think somebody said on the television last night, we’re three points off our full season total last year after only half the season, so that does speak for itself,” he said.

“I am careful, and would like to remind all our fans that really last season was a very unique scenario, we were a promoted team out of a play-off final, which is late in the calendar, it leaves very little time for planning and as all of our fans know we had many very mature seasoned pros out of contract at that point.

“So a full rebuilding was necessary in or out of the Premier League that summer, and I can’t help but notice a number of those signings that summer have really started to excel this season, and of course this summer’s signings have hit the ground running incredibly quickly.

“But they were bought with that purpose in mind, Dean and Johan were very clear to the owners that they wanted to go to the marketplace and recruit players who were ready to play in English football at the highest level with minimal risk of slow adaptation or lack of familiarity.

“I think when you bring all of those ingredients together then you are going to improve continuously.”

Purslow went onto make a prediction that will most definitely excite Aston Villa fans.

“And the final point I would make is that it’s a very very young average age, the lowest average age starting eleven in the Premier League,” he added.

“So one thing I’m really sure of is this team’s going to get better over the next two to three seasons.”