Bertrand Traore has revealed how ‘happy’ he is to help contribute in front of goal for Aston Villa. 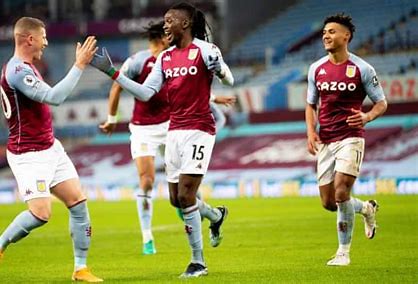 Bertrand Traore is ‘really happy’ with his strike against Newcastle and his goal-scoring contributions this season.

The Burkina Faso international doubled Villa’s lead in a 2-0 victory over Newcastle on Sunday.

Traore has scored five goals for the Villains this season and his strike against Newcastle ended a four-game winless run for Aston Villa.

The goal was his fourth goal in his last six Premier League appearances and his fifth goal since he joined Dean Smith’s side from Lyon in October.

Traore came through Chelsea’s youth system but after a season in the Premier League with Chelsea, he was loaned back to the Netherlands to play for Ajax in 2016.

A year later signed for Lyon for €10 million.

Traore’s performances at Lyon attracted the interest of Aston Villa, among many clubs, and Dean Smith signed the 25-year-old.

Bertrand Traore is delighted that he has helped to contribute in Aston Villa’s rise up the Premier League table.

“As a striker, it’s nice to get some goals for the team,” Traore told the club website. “After winning games, scoring goals is the most important thing for me in trying to help the team get some points.

“I’m really happy with the goal as I’ve been working hard for the team. It was nice to get the victory.

“We weren’t on a good run after losing against Manchester United and Manchester City, so being back at home was important for us and we got the victory.

“I think we were really good against City and today we just continued from the performance again but today we were rewarded.”

Traore will be looking to continue his exploits in front of goal against Burnley on Wednesday.